The Story of NCOS

An orchid in a deep forest sends out its fragrance even if no one is around to appreciate it. 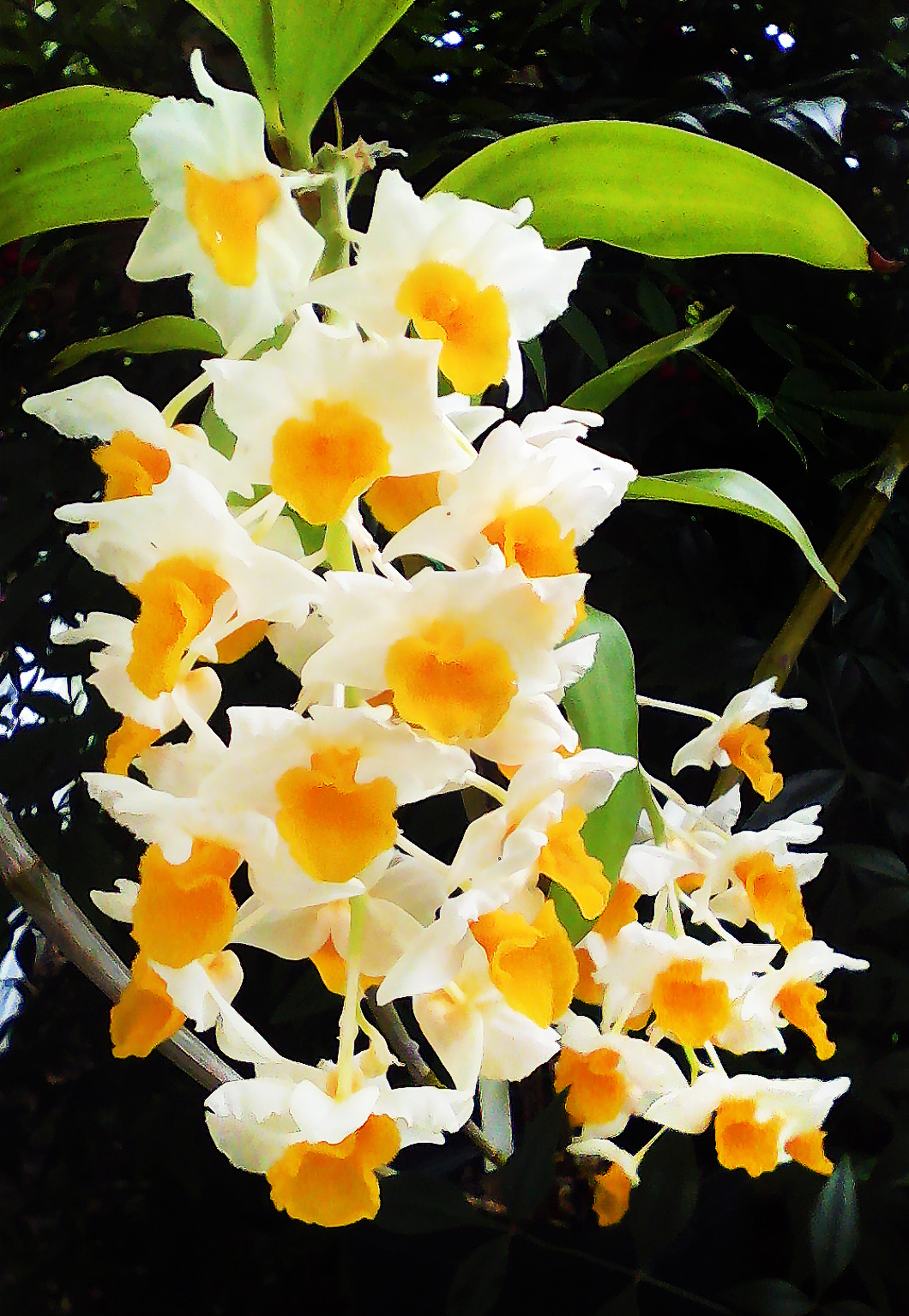 The notice in the American Orchid Society Bulletin was small, a simple request that “all orchid growers, amateur and commercial, in greater Washington interested in a local society and its formation, contact (Eugene Griffith).” It was February 1947, the total membership of the American Orchid Society was 3142, and there were only five affiliated local societies in the country.

Eugene Griffith had been inspired by letters to the editor in the Bulletin written by Jack McMillen and other local growers. McMillen, in particular, must have interested Griffith; a photograph in the Bulletin showed McMillen with some of the 250 orchids he had collected in Burma. Some of those orchids would soon form part of the first NCOS show, presented at the Pan American Union in Washington, D.C.

It was a good beginning for the National Capital Orchid Society. During the intervening years since 1947, NCOS has grown from the 24 charter members to over 300 members. In addition to the annual shows and auctions, NCOS has afforded its members opportunities for learning in the forms of wildflower walks, bus trips to orchid shows, greenhouse tours, and monthly lectures.

The shows have always been main events on the NCOS calendar. In the early days, NCOS held its shows in the lobby of the American Security and Trust, Co., thanks to the show chair Linnaeus T. Savage, who was also Assistant Secretary at the bank. Fearful of the appearance of a “run” on the bank, the bank president originally allocated a single tabletop to the show, but soon yielded the whole lobby when the response from would-be exhibitors was so great. No run on the bank ensued, but the free shows were extremely popular, with up to 38,000 people waiting in long lines outside the bank. One can only wonder what the bank president thought when orchid growers dampened the marble floors each morning and night to help with humidity.

The shows of that era were among the biggest events in Washington, D.C. International airline companies sponsored cut flower exhibits from such exotic locales as Japan, Africa, Cuba, South America, England, and the Philippines. At the fifth annual show, a local florist reminded everyone to vote in the upcoming presidential election by covering elephant and donkey frames with cut vandas. To the delight of show organizers, President Truman visited two shows, one year walking the two blocks from the White House. The preview parties themselves were social events with as many as 3000 guests, including foreign orchid growers, diplomats and Washington society.

After Savage’s tenure as show chair, the NCOS shows moved on to other venues. The eighth, in 1955, was held at the United States Botanical Garden, with $3 buffet for members at the Dodge Hotel. In 1957, the 10th show was sponsored by the Woodward and Lothrup Department Store in Falls Church, Virginia. Frank Sharpnack was show chair in 1961, when the show moved to Lansburgh’s Department Store in Shirlington, Virginia. NCOS hosted its 21st show without sponsorship, holding it for the first time at the National Arboretum in 1968. At that time, four dollars bought a spot at the Awards Dinner, which was held at the Quality Court Motel on New York Avenue just outside the Arboretum. A few months later, the newly formed National Capital Orchid Society announced in the June AOS Bulletin that it had a membership of about forty and that its first show, staged at the Pan-American Union in Washington, D.C., had been “much appreciated.” By November of that year, NCOS had affiliated with the American Orchid Society, only the ninth society to do so. Over fifty years later, AOS boasts a membership of over 30,000, and NCOS is a strong, vital society with over 300 members and a tradition of ties with AOS. The members of NCOS can look back with pride upon more than fifty years of leadership in the orchid community.

That involvement began early in NCOS’s history. At the second show in the Nation’s Capital in December 1948, the AOS, then unincorporated, held a meeting of incorporators and emerged as the AOS, Inc. Moments later, the Trustees of the new AOS, Inc. established the AOS monthly judging of “meritorious orchid plants and cut flowers.” (Dillon, 1949)

As a charter member of the Eastern Orchid Congress, NCOS has also hosted its share of EOCs. At the second EOC in March of 1957, society member Eben Richards earned both the first EOC bronze medal and a CCM of 89 points with his Sobralia macrantha nana, a plant so large it barely fit through the doorways. NCOS hosted the eighth EOC in 1963, which Dr. Edgar McPeak used to help lure the New Yorkbased Merritt Huntington into partnership at Kensington Orchids in the Washington, D.C., area. Mr. Huntington has since served NCOS and AOS in many capacities, including president for both societies.

The EOC of 1970 was particularly popular. Hosted by NCOS in conjunction with its 23rd show and a meeting of the AOS Trustees, it featured an orchid sales room that “attracted major interest” with over 1000 plants. (Hallstead, 1970) The show, with a theme of “Around the World in 80 Days,” was opened by the president of the Venezuelan Federation of Orchid Societies. Most recently, NCOS co-hosted the 41st EOC with the Maryland Orchid Society. Held in November of 1996 at Baltimore’s Inner Harbor, this Congress boasted an international roster of speakers including Joyce Stewart of the Royal Horticultural Society, Alan Moon of the Eric Young Foundation and Moises Behar, MD, of Guatemala. The immensely active sales room offered over 10,000 plants from U.S., Taiwanese, and British vendors.

In addition to AOS and EOC events and its own annual orchid show, NCOS has hosted conferences of more specific interests. In 1987, the society assumed sponsorship of the Paphiopedilum Forum. The Forum began in 1980 as a gathering of paph-loving friends of Tom and Mary Lou Dundon and Howard and Sissie King, who were prominent growers in the Washington, D.C. and Baltimore areas. By 1986, their annual event had expanded to 100 attendees, and the Kings and Dundons were happy to transfer its administration to NCOS.

NCOS co-sponsored the First International Phalaenopsis Symposium and Show in August 1994 as a way to have a summer educational event. Two years later, NCOS helped sponsor the Conference on North American Native Terrestrial Orchids: Propagation and Production. The 1996 event brought together virtually all notable terrestrial orchid experts, including speakers from the U.S., Canada and Sweden, resulting in significant advances in the knowledge of terrestrial orchid propagation.

For more than fifty years, NCOS has followed the decree of its charter members “to promote orchids in every possible way.” (Schairer, 1951) 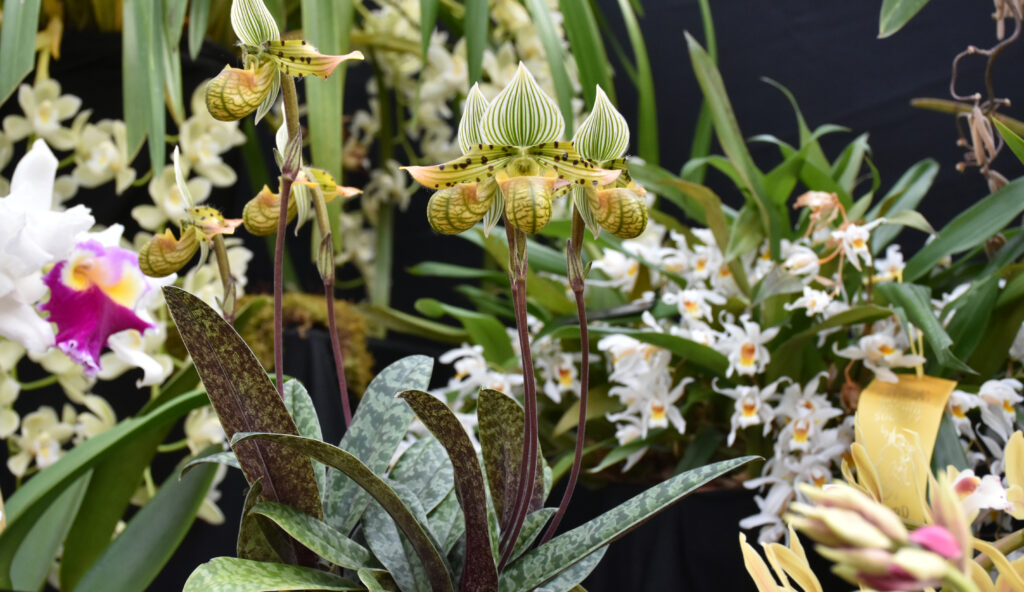 Our membership is made up of growers with a wide range of experience who share best practices and help each other. By becoming an active member of our community, you will have the opportunity to discuss how to grow these wonderful plants with other orchid growers, be provided access to plant stock from growers around the country and from the collections of other members, and receive regular communications about local events, activities, and orchid culture.

Please let us know if you have any questions.  We look forward to hearing from you! 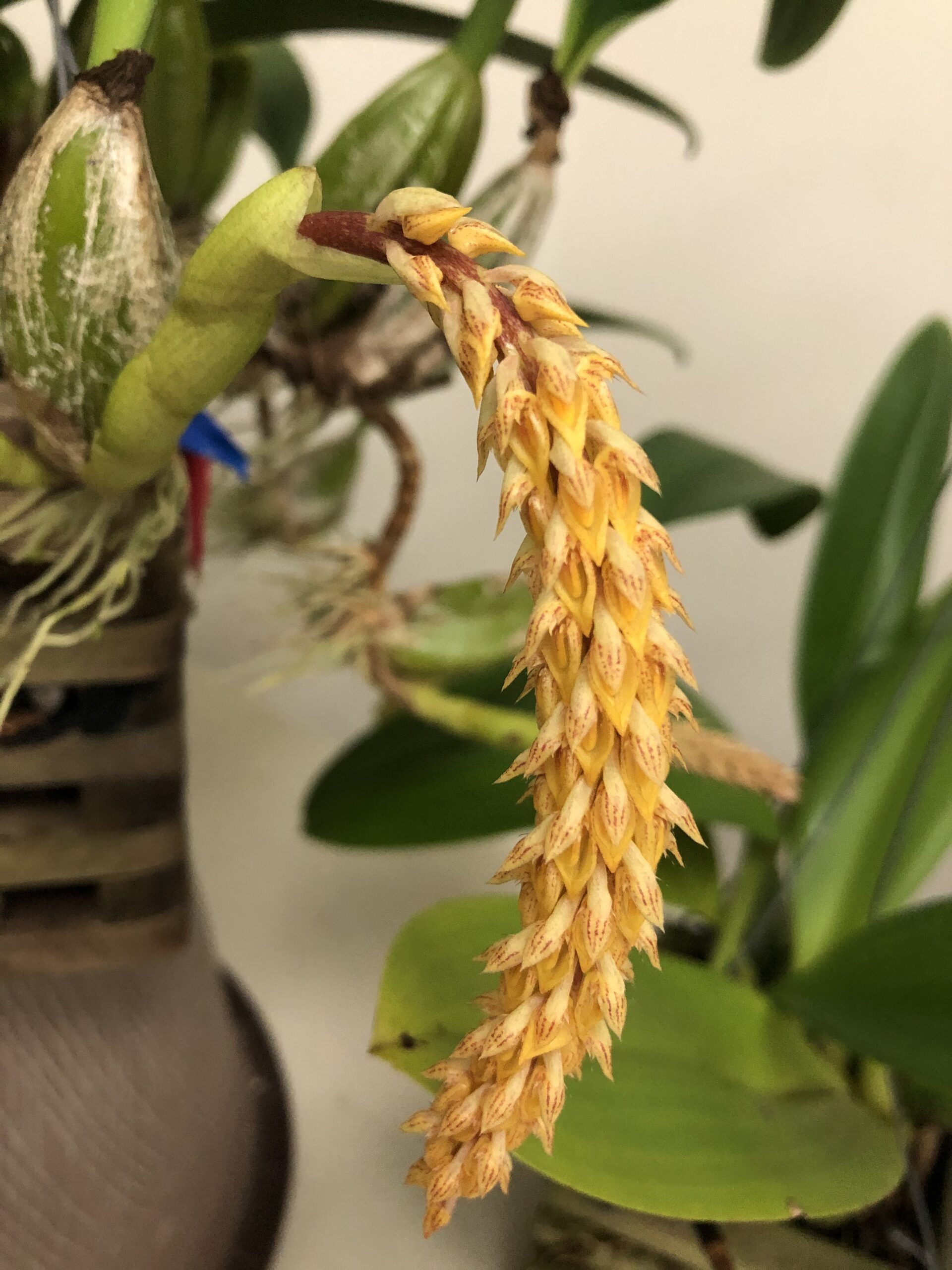 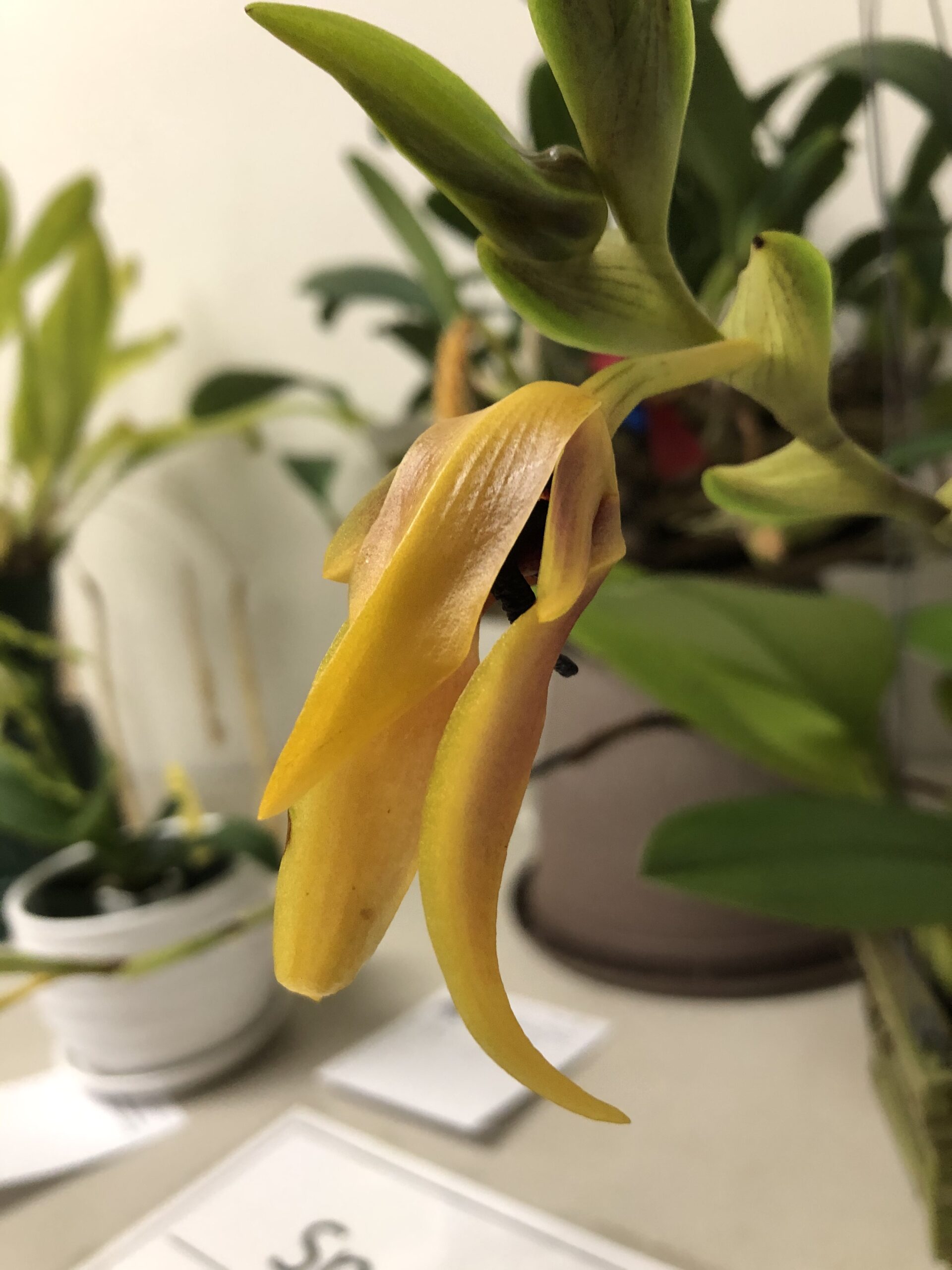 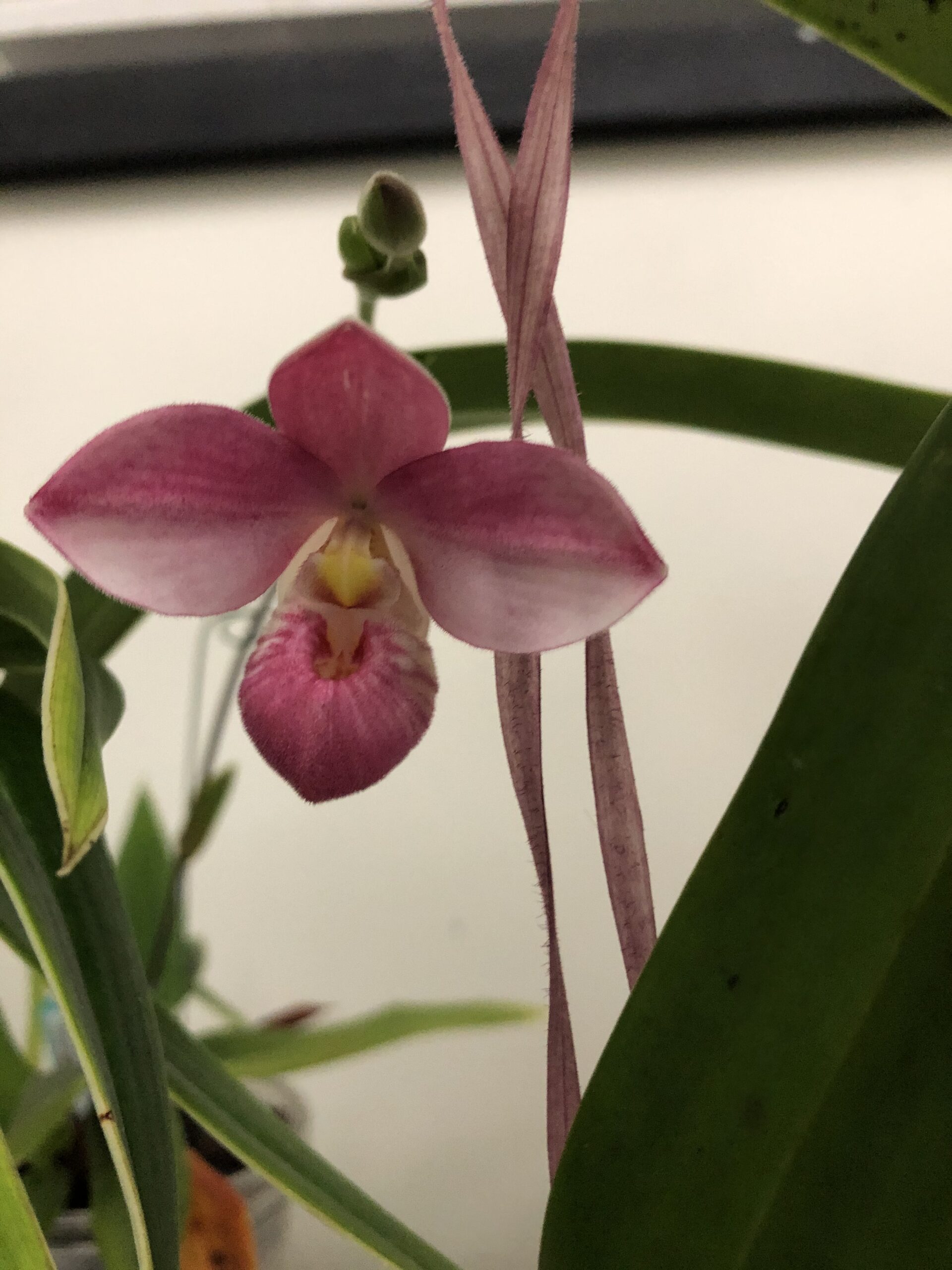 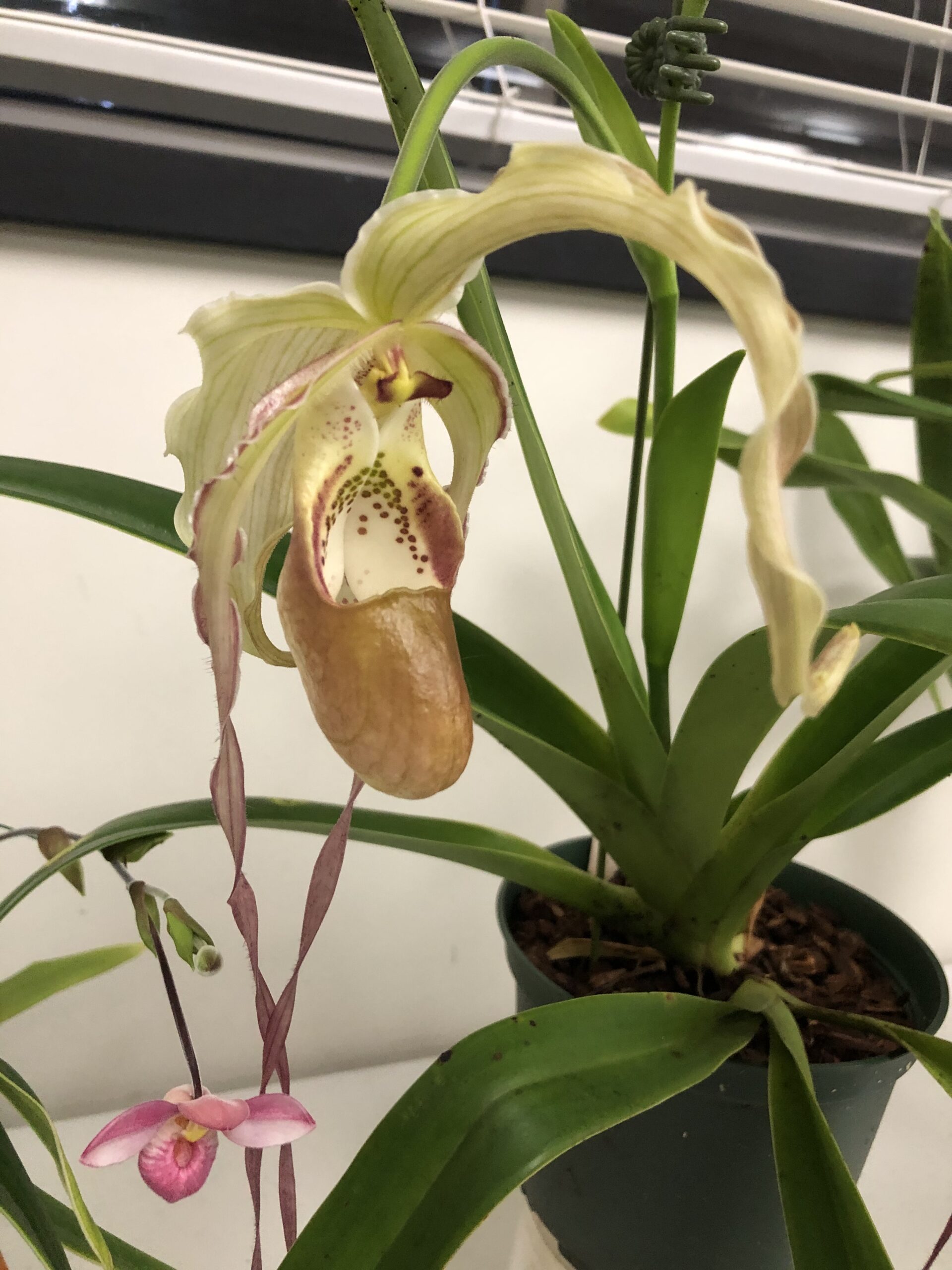 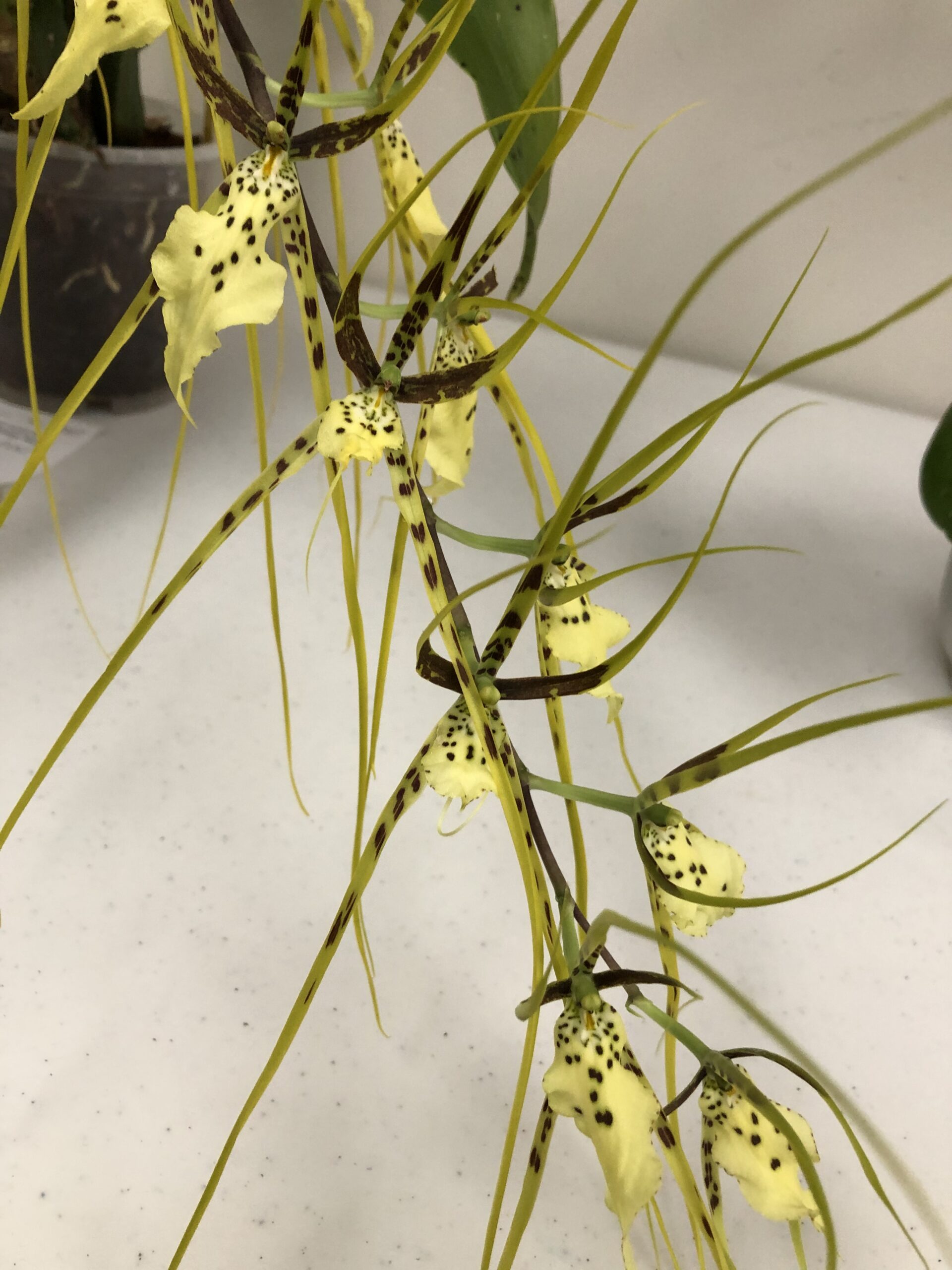 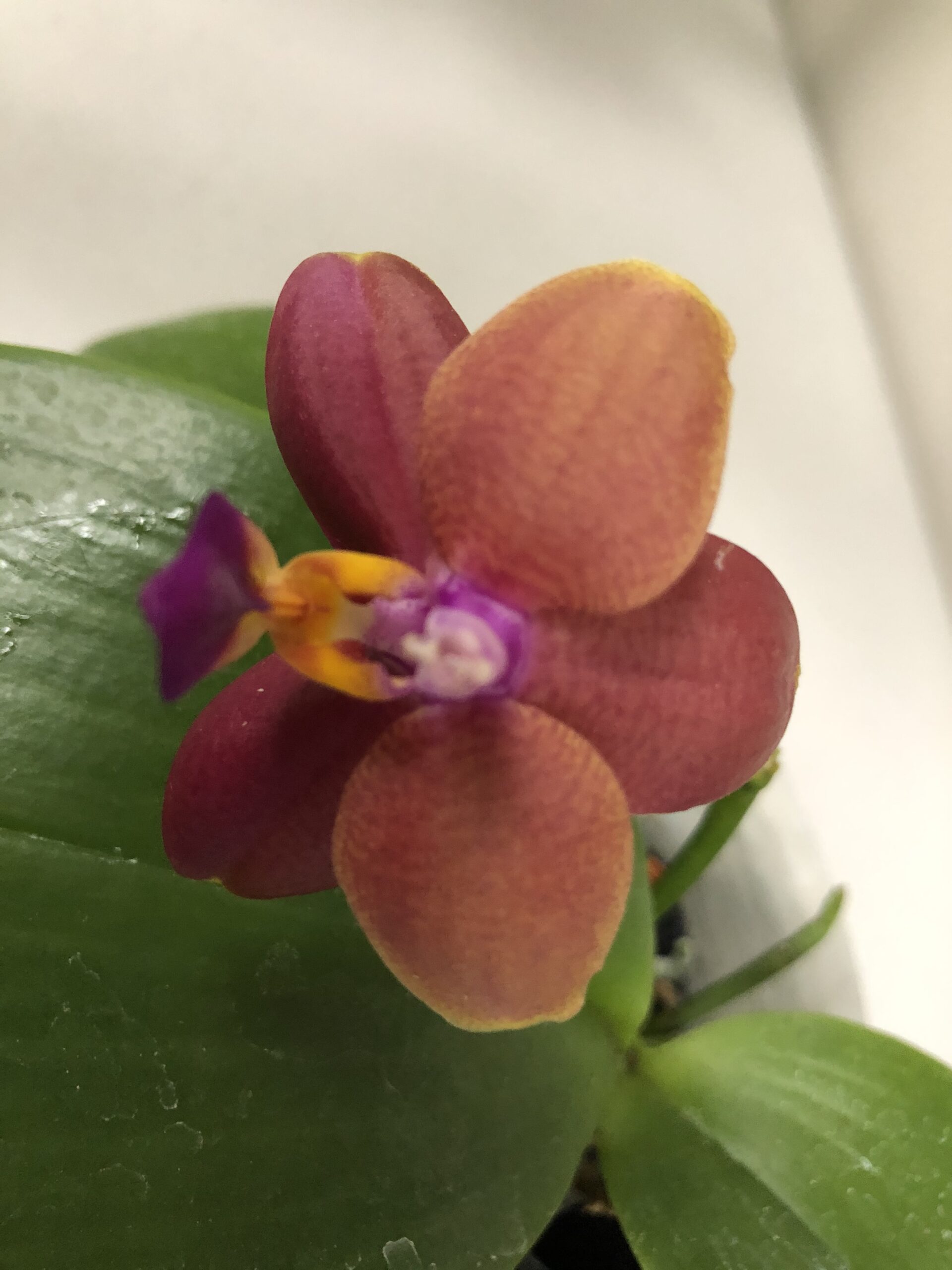 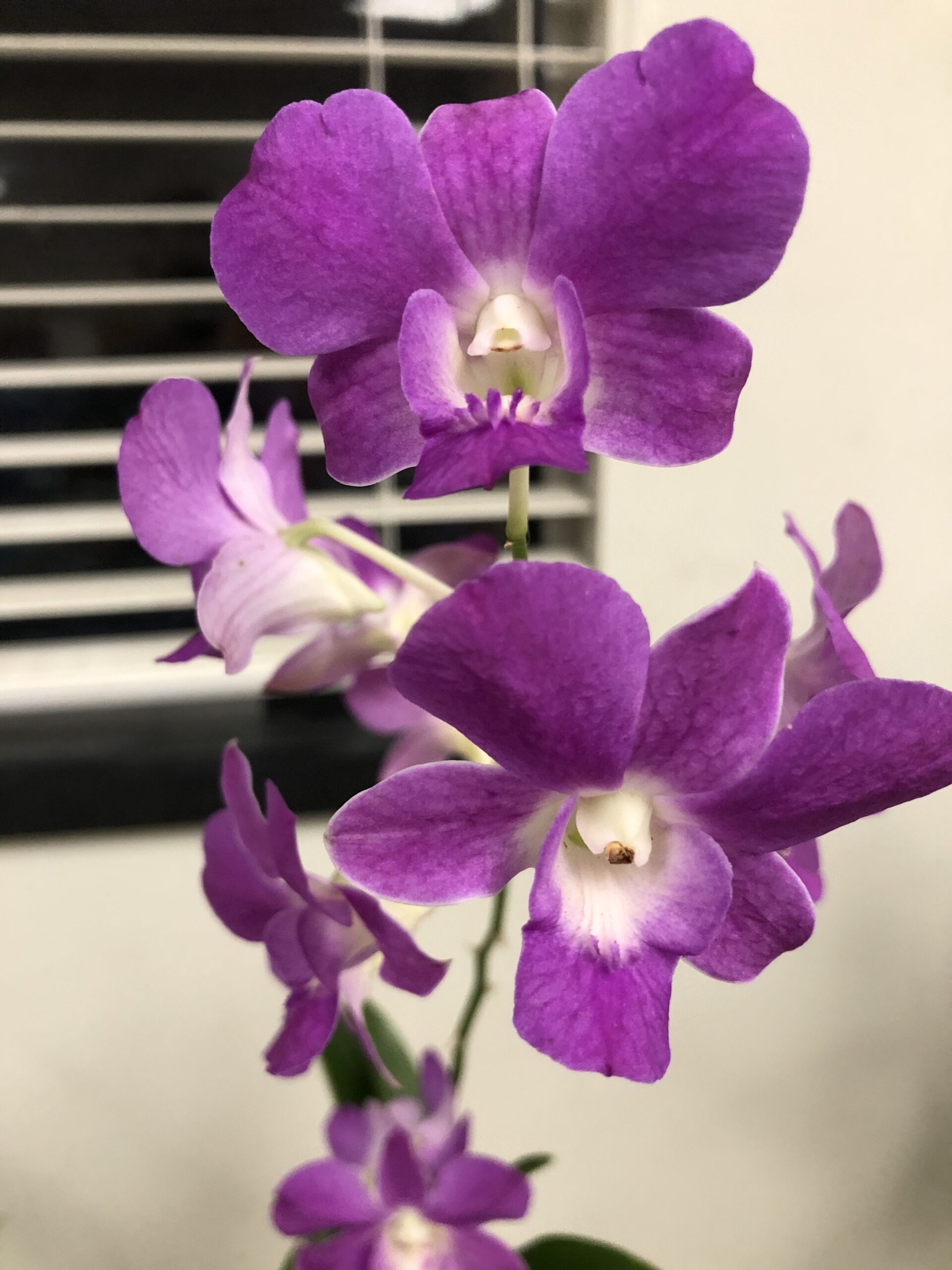 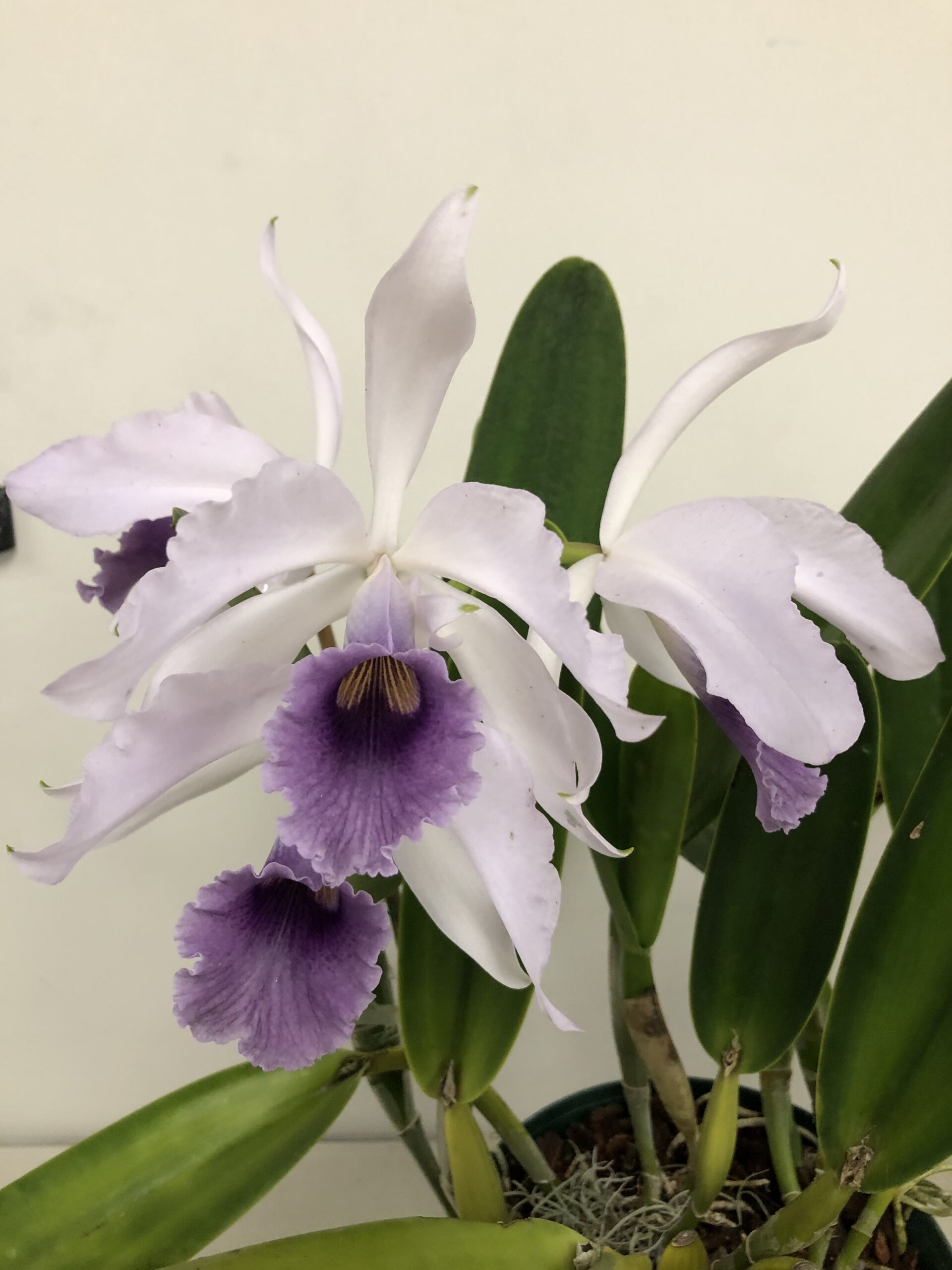